One of the neat things about the old Middle Earth Roleplaying Game (MERP) and Rolemaster was that characters gained experience points for every mile traveled. This was even calculated by whether they were going down a road or through wilderness (with rough travel granting more experience). I always liked this idea.

Sadly, it has never really caught on in gaming, and in fact, has been removed from the later editions of Rolemaster. Considering just how much stuff you have to do in order to travel through a hilly forested area without roads, I would love to see it added into people's games.

Maybe something as simple as an extra 50 xp for traveling through wilderness for one day. It doesn't have to be a huge amount, but a little bit helps encourage the whole exploration aspect of gaming. 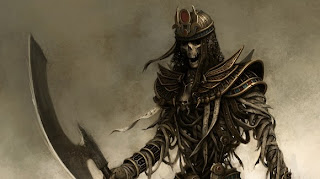 A while back I had posted the Skyrim Draugr converted to BFRPG. Since it is now getting included in a monster book, here is a more generic version for people to use.

Draugr are the undead remains of ancient kings. They appear as a skeleton wearing antique plate mail. They wield a two-handed sword in combat. They are only encountered in ancient crypts.

Once per turn, they can breathe a cone of ice out to 10' in front of them. Anyone caught in this cloud of frozen mist must Save vs. Spells or be stunned and unable to act for one round. Spellcasters in the midst of casting a spell who fail their Save lose the spell they were attempting to cast.

Draugr may be turned as vampires. Draugr are immune to Sleep, Charm, and Hold spells.
Posted by Dan at 12:49 AM No comments:

J.J. Abrams, who directed the newest Star Trek films, has been picked to direct the next Star Wars film. Millions of nerds heads shall now explode. Art that would make a great game

Some pictures just scream out adventure, and really make me want to game. Here are a few: 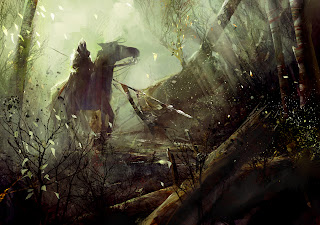 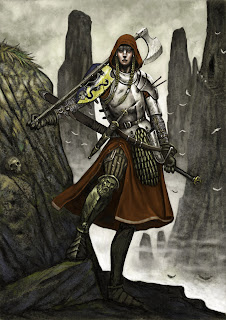 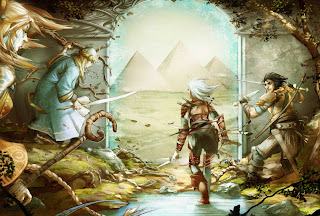 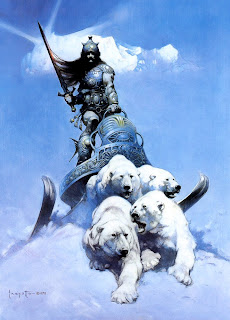 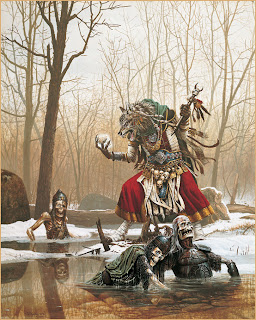 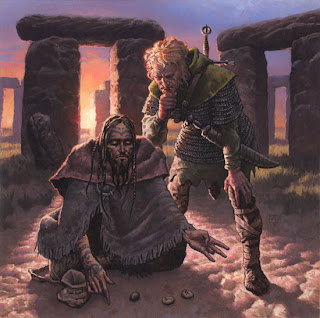 Click on the image for a bigger version.
Posted by Dan at 11:34 PM No comments:

D&D back on RPGNow as pdf

This is a bit late, but I thought everyone should be aware that many old Dungeons & Dragons books (and a few newer ones) are available at RPGNow. I recommend checking them out! Some are free. If you have bought older pdf versions from a few years back, you can redownload them. The pdf's have also been cleaned up, so there's no more crappy scans to worry about (which happened to me with a few of the books).

Funny thing is over half of the bestsellers are now D&D stuff, and they've only been available for one day. Moldvay Basic is Number One!

For those worried about it, I've used RPGNow extensively, and I've never had any issues with them (other than when WotC pulled it's pdf's a few years back).
Posted by Dan at 11:05 AM No comments:

I don't know about anyone else, but for me, this is fantastic! I really loved this version of the game. The only real changes I'd like to see are the errata and maybe some of the Spells and Magic stuff folded in. I'm definitely the target audience for this book, though.

Appendix N, as approved by me

What the heck. Everyone else is doing it, so I'll be a lemming.

If you are a Gamer, you should read these books:

The Hobbit and The Lord of the Rings by J.R.R. Tolkien. Pretty standard for just about everyone, I'd say. Hugely influential.

The collected Conan stories by Robert E. Howard. Very easy to find these days, which is a nice bonus.

The collected Fafhyrd and the Gray Mouser stories by Fritz Leiber. Actually, this is my favorite swords and sorcery series, even bypassing Conan.

The first three books of The Song of Ice and Fire series by George R.R. Martin. Not sure I'd bother after that, as I'm 99% sure he's going to die before he finishes the series, and this is a decent stopping point.

The Malazan: Book of the Fallen series by Steven Erikson. I personally love this series, though I have not yet read books 9 and 10.

The Deed of Paksennarrion by Elizabeth Moon. The best portrayal of a paladin in print. Nothing else is even close.

The Vlad Taltos books by Steven Brust. Psychic assassins in an elven empire. If that doesn't sell it, nothing will.

All of the various Newford books by Charles de Lint. He's the best urban fantasy author out there.

Neuromancer by William Gibson, so you can understand cyberpunk before it got twisted into the emo crap it is being pushed as now. This is the seminal book, and it's a straight-up shadowrun without magic.

There's lots of other great books out there, but I think these are the best of the lot. Many Forgotten Realms, Eberron, Shadowrun, and Warhammer novels are actually quite good, though more than a few are really, really bad.

Over on an RPGSite Thread there's a big discussion going about James M of Grognardia. He did a kickstarter for the megadungeon he's been running and blogging about. Apparently, he got over $40,000 for it. He worked with Autarch, at least for them to do promotions.

According to amacris: "In the interest of "clearing the air" of some of the guesswork:

Autarch is an LLC. Autarch LLC has a written, signed contract with James. The contract assigns all funds to James in exchange for his assumption of responsibility for development of the Product and delivery of the rewards. All IP related to the product are the exclusive property of James. Autarch is not the publisher of Dwimmermount and has no distribution rights. In exchange for our services, Autarch and James agreed to cooperate in good faith to promote each other's brand and business.

That's the contract boiled down. E.g. we have none of the funds, none of the IP, and no rights except to mutual publicity. I think it's objective truth that we've worked hard to promote Dwimmermount as per our contract."

This kind of sucks. I put money in for the map and set, and I was looking forward to it. Now it seems James has disappeared. Grognardia hasn't even been updated in 5 weeks. I hope it's not due to serious personal medical issues or something. If he is just giving up, or has run out of the money and can not do the print run, that really sucks.

I hope future publishers take the fact that many of the "upgrades" happened, and these same bonus items may have made the product unfeasible. If you really need to do a Kickstarter, make sure you have a realistic time and money plan before putting it out for the public.
Posted by Dan at 11:59 PM 3 comments:

The Rabbit Prince for BFRPG


This is a monster I came up with based upon a card in Paizo's Harrow Deck. 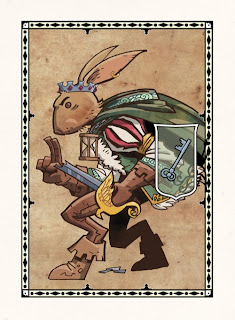 The Rabbit Prince is something of a mystery. He appears as a four foot tall, bipedal rabbit dressed in ruined finery, wearing an old crown and wielding a broken sword. He roams the wilderness, occasionally attacking farming villages. He has a deep hatred for predators such as hawks and wolves, as well as for the plow. Basically, anything that kills a lot of rabbits, even unintentionally, can become his target.

The Rabbit Prince will not attack elves or druids unless they attack him first. He will defend rabbits from any attackers he sees (including oxen pulling plows in fields).

He moves at a very rapid pace, and anyone making ranged attacks against him suffers a -2 to hit. He can leap up to 40 feet and attack in the same round. He has supernatural strength, which is reflected in the damage he deals with his weapon.

Once per turn, the Rabbit Prince can thump his foot on the ground rapidly. This is very loud, and anyone within 15 feet attempting to cast a spell must Save vs. Paralysis or lose the spell they are attempting to cast.

The Rabbit Prince is effectively immortal. If killed, he will reincarnate in a random burrow within a few weeks.

Something I probably should have posted a week ago: Talysman read my blog post on what I think a Swords and Sorcery game needs and how I think that current OSR games don't meet this criteria. He then created a series of posts on house rules that would work for this. His initial post is HERE. I recommend reading this and then the follow-up posts on sorcery. It's all pretty cool stuff.
Posted by Dan at 12:03 AM No comments:

This is a necromancy spell that SmootRK of the Basic Fantasy forum came up with. I think it's pretty cool.

The use of this spell binds a malevolent spirit into a pumpkin or similar gourd-type vegetable, creating a Jack O'Lantern monster (per monster description). The Jack O'Lantern will serve the caster for a number of days equal to his or her level, then become free-willed and depart. The free-willed Jack O'Lanterns typically remain in the vicinity of their pumpkin patch (within one mile or so) and they tend to congregate into groups over time. If one Jack O'Lantern's candle is extinguished, another will use its candle to re-light it.

In order to cast the spell, the Magic User must have a pumpkin or gourd of the appropriate size and a special candle costing 100 gp. While the spell's control is active, the Jack O'Lantern will follow the spell caster's directions to the best of its ability, having some intelligence to make decisions for the best course of action to accomplish its goals. Each will have a unique 'face' and may have particular personalities in role-play situations.
Posted by Dan at 8:11 PM No comments: 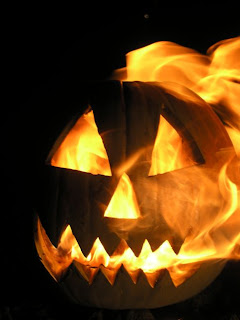 Jack O’Lanterns are evil, magical creatures. They may be constructs or a type of faerie. They are sentient pumpkins. They look like a normal jack o’lantern but they can fly. Their face is quite expressive, and they often laugh as they kill their victims.

Jack O’Lanterns are immune to poison, charm, and sleep affects. They take double damage from water and air-based attacks. If their candle is snuffed, they become dormant. Lighting a candle in a Jack O’Lantern will bring it back to life.

Jack O’Lantern’s can shoot fire from their mouths. This fire fills a cone five feet out from the creature. Anyone caught in the blaze suffers 2d6 fire damage. A successful Save vs. Spells allows the victim to suffer only half damage.

Taking out the Trash

As part of my New Year, I just went through my Other Blogs section and removed all of the blogs that haven't been updated in a year or more. Sadly, this caused six blogs to go away. I'm not sure why they all closed, but they apparently are gone. I suspect many people start blogging, thinking it will be easy, and then find out after a month or so that coming up with ideas to talk about or new content for games they like just isn't that easy.

There are a number of other blogs that haven't been updated in months, but I'm hoping they will be revived in the future. I really would like to see more people keep their blogs running, instead of posting a few great entries and then just disappearing.
Posted by Dan at 9:07 PM 4 comments:

I hope you all have a great year and get to do lots of gaming with friends! It helps make life worth living!