This is Bethesda's PR guy: 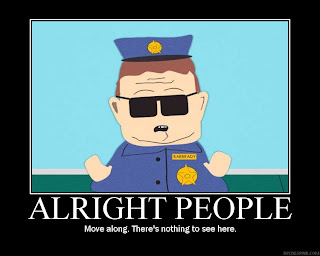 Seriously! Patch 1.2 is a complete screw-up, yet the only thing they've said is they're looking into it. And that's only after hundreds of complaints.

If you play Skyrim, DON'T DOWNLOAD PATCH 1.2! It's broken!

Dragons fly backwards and refuse to land. Magic/fire/frost/poison resists all are now set at 0%, even though they say they are whatever they should be. Etc. It looks like Bethesda really dropped the ball on regression testing. Very disappointing.
Posted by Dan at 11:49 AM 1 comment:

Just things I'd love to see added into the game:

Houses in every city. I really like both Dawnstar and Winterhold. Can't buy a house in either, though.

Better combat controls, something like how WoW keeps you aimed at your enemy, so he doesn't just disappear off the screen by sidestepping.

Have Saves stored separately for each character. When I'm logged into my fighter, I don't even want to see my mage's Saves. I definitely don't want to accidentally overwrite it.

Werewolves getting buffed with Detect Life and Instant Transformation and maybe more damage.

No Random Dragons - (has been fixed, though a more thorough one using the CK would be great).

"Clean up Riften" questline, turning it from a Blackbriar thieves outlet into a semi-decent place to live. Would likely feature Mjoll.

Unarmed combat brought back. I love being a kung fu monk.

Have all the unnecessary scrolling in the UI removed.

Versions of Iron/Steel/Imperial armor that are on par with Daedric, because I think they look better.

A questline to join the Light of Stendarr.

A revamp of the later game where Imperial or Stormcloak victory actually affects the world, especially in how NPC's react to me.
Posted by Dan at 1:04 PM 7 comments:

This is my character, Martine. She is a Redguard mage in the Skyrim game. She's modeled on being a voodoo priestess.

She uses the Topless Forsworn Armor mod (skimpy instead of topless variant - there are 2 mods in it). I'm enchanting the armor for magicka, magicka regen, and destruction buffs. She's a heck of a lot of fun. 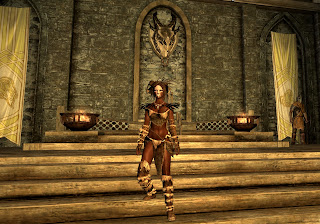 I shall be playing Skyrim for the next few days. :) Hope you all have fun out there!
Posted by Dan at 2:54 AM 1 comment:

I've seen phrase "Type IV D&D" being used on various old school boards and blogs. It's extremely annoying. What's the maturity level of the people who use this? 12? Heck, I don't know if I'd insult 12 year olds like that. Why don't you guys grow up and just call it 4e or fourth edition?

Otherwise, the people who matter, i.e. WotC, won't take you seriously no matter what good ideas you might have. Lord knows, I dismiss you out of hand.
Posted by Dan at 4:04 AM 10 comments:

I recommend BFRPG, OpenQuest, and Fight On! magazine. I'm sure there's lots of other great games there, as well.
Posted by Dan at 5:12 AM No comments:


It's Guy Fawkes Day! Now imagine your PCs trying to overthrow a corrupt government, especially if they are only low level and have the odds stacked against them.
Posted by Dan at 9:28 AM 3 comments:

When I play D&D games

Fighter = It's fun being the tank. When I play, I usually go sword and shield and plate.

Thief = The funnest class, imo. My only beef is that in older editions, their skills are so low they are damn near useless at low levels.

Mage = I prefer to cast buffs, use wizard eye to scout ahead, and summon monsters instead of just casting fireballs. I honestly think mages are much more useful if they focus on non-evocation spells.

Paladin = Holy warriors are just really cool. They have a mystique the other classes lack.

Human = They're awesome in both BFRPG and S&W.

Elf = I have liked elves ever since I was a kid and read Tolkien.

Tiefling = The idea of part demon characters is just cool.

Shifter = The best idea ever published by WotC. I love having an animalistic race as an option.

Aasimar = I love the idea of a part angel character, as well. Too much time in bible study when I was a kid, I guess.
Posted by Dan at 1:43 AM 2 comments:

For those who care, today is the first day of National Novel Writing Month! I've got over 900 words done today. I'm writing an urban fantasy story with redcaps murdering people and the hero investigating and having to confront them.