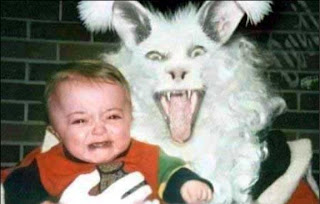 I was sick all week and had to work today, so I have to miss out on the family meal and all that stuff. It's also raining. Blah!

In D&D, invisibility is dispelled as soon as you attack someone. This is a game balance mechanic, as it makes it fair for the enemy. If you kept your invisibility, you cause your opponent to take a -4 to hit penalty. So it does make sense, in a "fairness" kind of way.

I was thinking that maybe you should keep your invisibility until you are hit. It makes it tougher on your opponent, but I think you being wounded would make you much easier to find, especially if you were cut by a blade. Not sure if this would make invisibility too powerful. Maybe increase its spell level to 3. Just an idea.
Posted by Dan at 9:36 AM 1 comment:

I really wish more games would incorporate the Warhammer style of art. Much of it is black and white, and it is better looking than a lot of color works from other games, imo. I like some of the cartoony or straight fantasy stuff in D&D and similar games, but none of it is as atmospheric as the Warhammer art (Planescape is the best example of well-done D&D art styles). 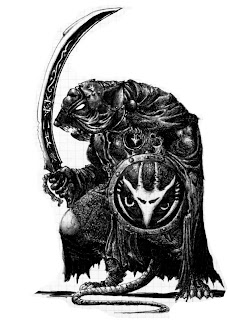 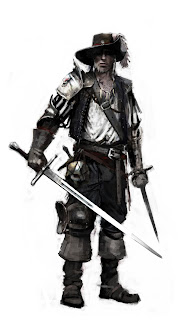 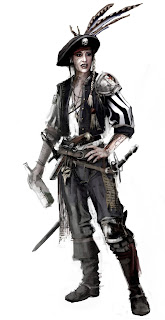 This is kind of old news, but also a bit of new news. Wizards of the Coast has been putting more and more stuff on RPGNow: WotC pdf List. Some of this stuff has been made available again over time, after the initial big hullabaloo a few months back. If you haven't been keeping track, I recommend checking the list out. You will find some real gems in there.


Luke, Leia, and Anakin. The family connection and the destruction of the Death Star. Coincidence? I think not!
Posted by Dan at 11:17 AM No comments:

I forgot to add prices for the greatcoat and a RPGSite forum-goer suggested I add a breastplate, which is a great idea.

Greatcoat  AC +2   Cost: 20 gp
A greatcoat is a leather trenchcoat that reaches down past the knees. 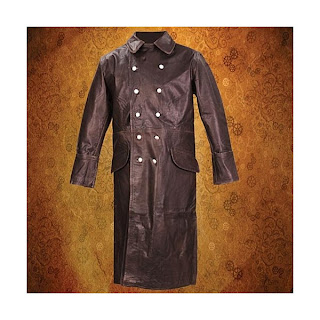 A breastplate is a solid piece of metal armor covering the chest and back. 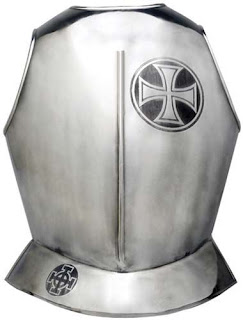 You are a witch hunter, trained in rooting out evil mages and defeating their terrible minions. You have seen horrors that would drive a normal man insane, yet you continue your righteous quest to protect mankind from the demons of the Underworld. Some may even think that your near single-minded devotion to this task is a form of insanity itself, but you know better. You are also well aware that the servants of darkness are the first to cast doubts upon your character, and target these foes swiftly and relentlessly.

Despite your zeal, you are not stupid. You know that evil men may spread lies about innocent people in an effort to have you remove their enemies. You try your best to find the truth in any situation, because if you allow gossip to direct your actions, you will become a tool of the demons yourself.

Detect Evil: Witch Hunters can determine if someone is an evil witch or other supernatural creature after speaking with them, unless the creature makes a saving throw. Note that hedge witches who just help the local peasants or Good-aligned magical creatures will not show up as evil. Only those who use magic for evil purposes will be revealed with this power.

Resolute: Witch Hunters routinely deal with truly horrific monsters and receive a +2 bonus on all saving throws vs. fear or magic.

Temporal Authority: Witch Hunters have the authority to conduct trials and execute witches and other sources of supernatural evil. They must be very careful when they deal with nobles or clergy, as more than one overzealous Witch Hunter has disappeared after angering the wrong person.

Attract Followers: At 9th level, a Witch Hunter can attract a body of loyal followers who will swear fealty to him. These followers may include soldiers, peasants, priests, and apprentice witch hunters.

Greatcoat: AC +2
A greatcoat is a leather trenchcoat that reaches down past the knees.

Torch: Damage 1d6 + special
Witch Hunters can use a torch as a club. In addition, if they hit an opponent with a natural 20, the opponent catches fire and takes 1d6 fire damage each round thereafter, until they can put the fire out. 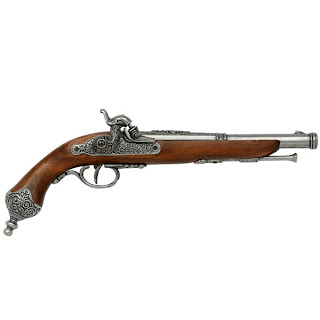 Ghostshot is a magical flintlock pistol, from a long-gone era. It is an artifact.

Ghostshot can damage any creature, including those only affected by magical weapons.

It can be used by any class.


It magically reloads itself, and can fire once per turn, even underwater.

Ghostshot ignores non-metal armor. Anyone in leather or similar armor is treated as being unarmored.

It is loud, especially indoors. Anyone within five feet of the pistol when it is fired takes a 50% penalty on all Listen checks for the next 1d6 rounds. All nearby creatures will hear the pistol's report, unless they are behind sealed doors or walls, or are deaf.

Zak has come up with a really cool variant for a Barbarian class. Basically, every time you level, you roll on a random table to see what you get. No just getting a +1 to hit every level (unless you keep rolling that). I think it's a really neat idea.

I would love it if someone actually made tables like these for every class, and published them. I'd buy it. It's actually the kind of thing I think would warrant a new OSR game. If every single class in the game has a random table needed to level (and maybe even at character generation), it would be a really cool twist to basic D&D.
Posted by Dan at 9:59 PM 2 comments:

This is kind of based on Swords & Wizardy, along with the other older D&D editions.

All classes and race-class combos have the same table. You must roll equal to or greater than the saving throw number to make a save. (Based upon max level 10, but easily modified for higher max level).

Everyone uses this table. In addition, every class gets its own special bennie, as follows (with race-as-class included):