I've been playing Guild Wars 2 a lot, and two of the player races are aliens who actually crash-landed on the planet. I think this is an awesome idea.

The Charr have a giant globe spaceship as their home city. They are big, cat-like beings with horns. They are very tough, and value strength over other attributes. They are constantly in a state of war, from what I can see.

The Asura are little floppy guys, who value intellect above all. They have a lot of golems, and golemancers are incredibly influential. They work together in krewes, and are far more concerned with Science (pulp science, at that), than marching off to war. Their home city is a giant cube, also a spaceship. 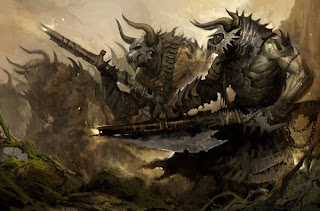 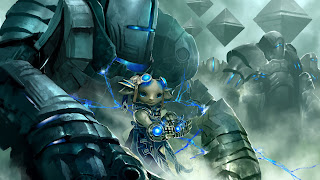 I've got some rpg stuff for sale on ebay. I suspect some of you may be interested. US buyers only, though.

THE BIG NEWS I'm sure a whole bunch of people are going to be jumping on this. I am not all that tempted, honestly. I know a bunch of you guys are probably jumping up and down right now, though. :)
Posted by Dan at 1:17 AM 1 comment:

I've been playing a lot of Guild Wars 2 lately, and the big monster in the human lands is centaurs. I thought this was pretty cool. Usually, games go for goblins or orcs as the main monster, but not here. I like it. However, I do have a fondness for goblins, so they will always be important in any campaign I run.

Monsters I prefer as the bog-standard bad guys:
1. Goblins. The classic bad guy, for a reason. Sneaky, mean, and dangerous (but not too dangerous for 1st level characters). I mix hobgoblins in with them for extra punch.

2. Beastmen. Tough and also pretty darn evil, especially if you make them more like the broo of Glorantha or the beastmen of the Old World of Warhammer.

3. Gnolls. Also very tough, but great villains. Hyena-men just sounds dangerous. Add in the laughs at night while the party is camped and get the players worried.

4. Lizardmen. Tough and dangerous. I often pair them with yuan ti.

I'd like a world with no major gods of agriculture, the sun, etc. Instead, people worship heroes. The big time generals and conqueror kings actually ascend to heaven and grant spells to their priests. If a culture is destroyed, its gods are forgotten and go away.

This would give a very good reason for adventurers to exist. If they become famous enough, they could literally become gods. Not to mention minor gods that maybe saved a village. They could become demigods, even if their power only extended to that small area.

Not sure how this would work in actual play, but I think it might be worth working on.

I really like BFRPG. It's my favorite retroclone, these days. One of my pet peeves is Thief Skills, though. I addressed this in my supplement a bit, but I've been thinking about this subject more.

I believe 1st level thieves should have maybe 30% in every skill (and the standard 80% in Climb Walls). This wouldn't be a huge boost, but they'd at least be near a 1 in 6 chance of actually performing their job function. Increases for the next few levels would be around 5%, then scale it back.

Also, I think all of the other classes should be able to Hide, Move Silently, and Climb Walls. Give them a flat 10% chance to do so, with penalties for heavy armor. It would make more sense to me, at least. Don't let them do thinks like Pick Pockets, though. Keep the actual "thiefly" skills class-specific.

Games Workshop goes even more evil than before

GW has gotten Amazon to remove a novel because it features space marines. Apparently, they think no one but them has the right to publish such material. It really pisses me off. I used to play 40k a lot, and I've read a ton of GW novels (many of which are actually quite good). But legal shenanigans like this really bug me.

As of right now, if you publish a novel featuring space marines, you could have it yanked because of GW. Heinlein and even earlier authors are likely rolling over in their graves.

The historical goblins were actually pretty powerful faeries. D&D took it's idea from Tolkien, making goblins weak, but even in Middle Earth, goblins are very dangerous. Of course, compared to a 0-level human, goblins are pretty dangerous. Adventurers over level 3 pretty much laugh at them, though. That annoys me, a bit.

Ideas:
1. Goblins have faerie blood. They can all use minor magic. Maybe give them one level 1 spell, such as Dark. Or grant them limited invisibility once per round.

2. Have goblins get level 1 thief skills for free. I think this would work well, and make them nastier without going overboard.

3. Have them use poisons regularly, so that anyone struck by them will be making a Saving Throw.

4. Hobgoblins would be older, tougher goblins. Maybe give them up to 4 Hit Dice, with more Hit Dice meaning they are older and tougher. Any given group will likely have a hobgoblin in it. He would also have access to whatever special abilities normal goblins have.

5. Since goblins are fae, maybe they are neutral or even friendly with elves. This kind of leads to a Summer/Winter Court scenario, though. Evil elves might work with goblins, and they wouldn't automatically hate each other. And maybe some few goblins are actually good guys. Not sure I like that, but it's an idea.

One setting I think never gets enough attention for fantasy is the brand-spanking new colony. The players are right off the ships. There is a small town and some docks. Go ten miles inland, and it's largely unmapped wilderness filled with savages.

This also allows the players to have a variety of backgrounds. Maybe they came from a cosmopolitan Empire. Maybe it's just a bunch of prisoners dumped off at a work camp (in preparation for the "real" colonists). Maybe one of the players is a friendly native.

Another twist would be that the natives are goblins or elves, and the colonists are humans and dwarves and halflings. Or some other mix.

It would also be cool if the new territory had once been a powerful empire, but was wiped out for some reason. The current occupants are the barbaric remnants of this empire, and at least a few of their old cities lie in ruins not that far distant from the colonists.
Posted by Dan at 7:23 PM No comments:

Sports in fantasy games are rarely mentioned (they really aren't that applicable to gaming usually), but here's some ideas:

1. Goblin ball. Kick the goblin across the goal line to win! Everyone wears leather armor. Magic and weapons are not allowed. Kicking, punching, and tackling are perfectly fine though. Oh yeah, the goblin gets a dagger.

2. Hold the bridge. Two teams, each in armor and wielding clubs and staves, fight over a bridge. Whoever holds it after 15 minutes is the winner. A popular variant has three teams involved, with one big team in the middle and two smaller teams on each end.

3. Don't Flinch! Spellcasters face off against each other using illusion magic. Whoever steps back loses.

Of course, the winners get money, booze, fame, and girls. Losers also do fairly well, as long as they put up a good match.
Posted by Dan at 2:20 PM 1 comment: