This is a new OSR game as seen HERE on RPGNow. It looks interesting, but I'm still not convinced I want it. For anyone who has it, here's a couple questions:

2. Is magic mostly just classes with different spells from the various OSR games?

3. The followers look interesting. Does every class get them, and are they worthwhile, or just a headache in play?

Does anyone have some massive portent appear in a campaign? Maybe one night, a big-ass green comet appears in the sky. The GM just mentions it.

The next game, he mentions it again. This continues, with maybe local NPC mages and priests getting real worked up and even hiring the players to obtain some lost magic item that will be needed as the comet reaches its apex.

Or maybe some big bad will take the comet as the sign that he needs to destroy the players homeland RIGHT NOW, so they get sucked into a war.

I think one could way to make your setting more unique is to have some elementals actually living in the world. They would be nature spirits, and might even be worshipped by local tribes. I'd give them more intelligence than your typical summoned elemental, of course, so that players could interact with them.

This was done in Exalted and Avatar: The Last Airbender (and a bunch of Eastern myths), but I don't know that it's been included as part of a vanilla European fantasy setting. I think it would be a cool variant, even if it's only in one area of the map.

Scary part is, I had completely forgotten about this until it was mentioned on RPGSite. Honestly, there's nothing being released (that I am aware of), that I'm even mildly excited about. Maybe next year, if 5e is released at GenCon, I'll be a lot more excited. As is, it's just "neat but basically uninspiring" news.
Posted by Dan at 3:48 PM No comments:

Only humans and one other sentient race

I think it would be interesting to have a world with only humans and one other sentient race. The humans would be dominant, but they would have to worry about the other race. Maybe it's orcs or beastmen. Even better, skaven would happily take over the sewers of human cities. Even just having elves would be cool.

Of course, there would still be monsters. Something like owlbears and griffons would still be around, but only as strong animals. Even some "smart" monsters could be made to have animal intelligence, especially ones like the minotaur. Or have intelligent minotaurs as the rulers of the beastmen.

I guess I've always viewed the broadsword as a knightly weapon, looking like this: 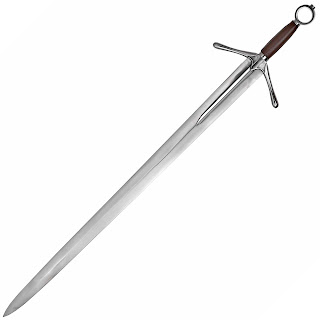 Apparently, once it got to the early Renaissance, they got basket hilts. Kind of like a rapier, but with a battle-worthy blade. Like this: 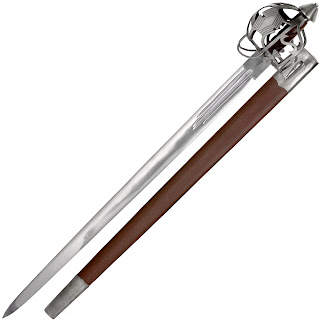 I don't know about anyone else, but I really like the basket-hilted version more than the plain knightly version.

I sorta remember some fencing rules included in A Mighty Fortress for 2e. I no longer have the book, unfortunately. Not sure what happened to it, but it was very good. In any case, I was wondering if anyone had some fencing rules (rapiers, main gauches, cloaks as shields, etc) that were simple but worked fairly well.This would be used for BFRPG or B/X, so conversion should be fairly easy, if necessary.
Posted by Dan at 9:15 PM 3 comments:

It's a toss-up for me. I really like the idea of a new colony in a New World, with lots of wilderness and monsters. This allows you to do all kinds of fun stuff, especially if the settlers are from a large Empire that contains multiple cultures.

Another idea would be an Italian city-states style area. Multiple large city-states that are fairly close together, with roaming armies (including mercenary companies), and maybe an old ruin that just happens to be inhabited by ghosts or other monsters.

I'd also be interested in a Napoleonic setting, in an out of the way location, with patrols of both sides in the area. There would be some kind of local antagonist or monster to deal with, as well.