Jack Vance passed away. He is a HUGE influence on gaming, especially via the D&D magic system. He is also probably one of the greatest authors of the 20th Century, despite what the moronic Literature professors would say. If you haven't read any of his books, you really should. 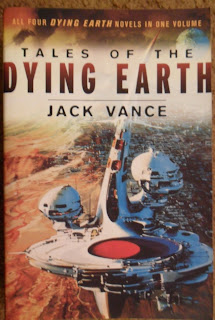 It contains the Cugel stories, along with other related stuff from the same world. It is probably the best collection of fantasy you're going to find, all by one author.

No, not the Palladium Fantasy game, which I have and love. But something more like an OSR game. All wizards and fighters and thieves and such. Maybe have the various fantasy races (elves, goblins, etc) all coming from Rifts. Some are helpful, some are evil. Splugorth can still hang out as one of the big bads, though. They are a fantastic race.

It's kind of surprising someone hasn't done this. It would be hard to have the same feel without robots and cyborgs and other hi-tech stuff, but I think it would be doable. More ruins, less standard fantasy areas.

Actually, having one or two races using golems extensively (similar to the Asura in Guild Wars 2) would be kind of cool, but keep it limited to them. Not everyone should have one.
Posted by Dan at 11:43 PM 1 comment:

I may be nerdy, but this is the set of reprints I've been waiting for! Best official edition of D&D ever published. I know I certainly played more hours of this game than every other single rpg combined. So many great campaigns in the Forgotten Realms, Ravenloft, Planescape, and Birthright. So many awesome memories are combined with this rule set. I love the fact that WotC has reprinted them!
Posted by Dan at 8:54 PM 1 comment:

Traveller 5 is out in the wild

Looks like Marc Miller has started shipping books of Traveller 5 to the pre-orders.

RPGSite Thread - Here are some pics and various posts about its contents.

From that thread, it looks like I won't be buying the game. I'm really glad that Marc finally finished it and got Trav5 published, but the game is very different from Mongoose Traveller, which is my personal favorite (though I did like the Traveller: New Era setting, its rules were terrible).

For those of you who are long-time Traveller fans, this is probably a must-buy. I just wanted to spread the word that the book is now shipping.

What books are best avoided in the Rifts line? I know at least South America 2 is probably on this list. I don't like the players being super-powerful, and some of the books put them on the level of taking on gods.

Stuff I currently have:

Rifts anniversary edition
Sourcebook I: Archie
Lone Star (mainly for the dog boys)
Mercs
Mystic Russia (haven't delved too deeply into this. Are there any ridiculous PC races/classes?)

I used to have a bunch of Rifts stuff, but sold it off. I regret it now. Most of the games I've gotten rid of are in better hands, but I still love the idea of this game, if not all of its implementation.