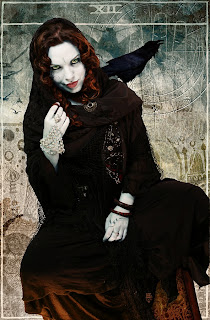 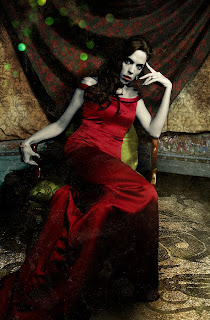 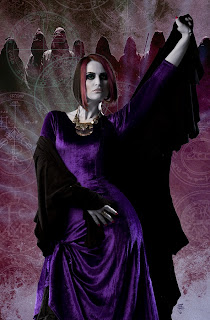 Tremere
Just 3 new picks Tim did for the Vampire 20th edition book. He's still the iconic vampire artist for me.
Posted by Dan at 6:15 AM 1 comment:

Winter and the effects of travel 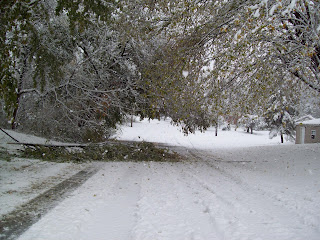 The view of the road leading to my place, taken yesterday. It's too damn early for this!

One thing I don't think is addressed well in gaming is the effects of snow on travelers. Not having snow plows, many roads would become hard to find, if not impassable. If the group does not have snow shoes or skis, they will have a heck of a time getting anywhere. And they'd be tired as heck after going only a mile or two. They'd hardly be in any condition to fight.

If attacked, I'd think someone who has been forcing his way through snow should have a penalty to both his to hit rolls and his armor class, to reflect the fact that he'd likely be too exhausted to do much to defend himself. Something like a flat -1 to AC and a -1 per hour traveled penalty to hit.
Posted by Dan at 4:33 AM 2 comments:

I love stone circles, as found in the British Isles and the Atlantic seaboard of Europe. I generally use them as centers of worship for elves and druids. I have also used them as magical gates to the faerie realms. So here's a table for people to use.

Stone Circle Encounters
1. A small group of elven archers maintains the circle. They have a permanent camp set up in a nearby copse of trees. They generally won't disturb people who are there for worship or just to rest while hiking, but will attack any evil races who attempt to approach the stones.
2. A magical gateway opens as the group approaches. On the other side they can see a great forest. No one is around.
3. A druid maintains the circle. He has a small hut nearby. The locals often deliver fruits and vegetables, in return for his blessings.
4. A group of goblins is defacing the circle. They are attempting to push over the stones.
5. Pixies and brownies live around the circle. They will play pranks on any who approach, and may steal a small item.
6. A necromancer has perverted the circle, using it to raise undead. He places corpses within the stones and casts his spells. All undead raised here have maximum hit points and gain +1 to their saving throws.
7. The circle is old and abandoned. Weeds and brush grow throughout the area. Some stones are on their sides. Perhaps with care, it may return to its former power.
8. A cleric has built a small manor near the circle. He considers the place to be a haven of sin. Some pixies have lived here for ages, and torment the cleric daily.
9. A druid lives in the circle, under the open sky. He has only a bedroll. The local fae respect him, but the human baron who controls the land fears his power. The druid is unhappy with the baron, who has started logging the forest.
10. The stones have glowing blue runes marked upon them. During thunderstorms, the entire hilltop shines and can be seen for miles around.
11. The stone circle marks the resting place of a great elven lord, who fell in battle against an evil god. Elven sentries will attack any non-elf who approaches.
12. The stones are pitch black and radiate evil. Monsters are attracted to the area and are encountered very frequently.
Posted by Dan at 8:11 AM 3 comments:


One of the most surreal, creepy scenes ever made.
Posted by Dan at 3:05 AM No comments:

What if dungeoneering was illegal?

Throughout history, grave-robbing has been illegal. Yet many adventures feature the party going into some crypt to search for treasure. Why wouldn't this be illegal?

It would be interesting if an adventuring party went back to town, loaded with loot, and were then confronted by the local constabulary. They might be arrested, heavily fined, or just have all their possessions confiscated.In very religious countries, it's likely that they would be executed.

Just something I thought might be an interesting twist for a campaign.
Posted by Dan at 8:17 AM 8 comments:

Another Tolkien song from Colin Rudd. I think he does a fantastic job with these.

I don't see a good reason to prevent low level mages from casting Animate Dead. They will just not be very good at it. So I've made a new version of the spell, which improves as the caster levels.
Animate Dead
Spell Level: Cleric, Magic-user, 1st Level
Range: Referee’s Discretion
Duration: Permanent
This spell animates undead from dead bodies. The caster must have corpses available to use this spell. He can use animal corpses if necessary, though small animals are limited to being skeletons or zombies. Mummies must be made from a humanoid creature.
The undead remain until destroyed, and will follow the caster’s commands. Wights and mummies can make a saving throw to escape the caster’s control when they are first created. If they succeed, they can either attack the caster or flee to terrorize the countryside. Only truly mercenary or evil spellcasters will use this spell.
One HD of undead are animated per level of the caster.
Casters are limited in what types of undead they can raise:
1st level: skeletons
2nd level: zombies
3rd level: ghouls
5th level: wights
8th level: mummies
Posted by Dan at 8:45 AM 7 comments:

(Rant) Rethinking the games I support

Lately, I've been buying products for games that are published by basically one-man companies. Part of this is that I think some of these games are just plain better than those published by WotC. However, I'm getting frustrated.

It seems many games come out with the base rules. Following this, there's lots of chatter from the writer and his supporters. There will likely be a few pdf's released. Maybe, and I mean maybe, there will be a print supplement.

It is driving me crazy! I like to buy supplements for games I like. Especially a setting book, monster books, and even an adventure or two. And getting other people to play a game can be difficult, as many players see that the game has no supplements, they consider it to be "dead", even if it is still in print.

While I realize many publishers are just guys doing this in their spare time, I also see companies like Hero Games (which is only two or three people) pumping out books every month. And those books are well done and worth having for that system.

While some games have tons of pdf support (BFRPG and BASH! are good examples), there just isn't any print support. It feels like lots of promises are made early, and then everything just becomes vaporware. I really, really hope when D&D 5e is released, that it is a great game. I'd love to have good quality supplements available on a regular basis.
Posted by Dan at 8:42 AM 6 comments:

This is just a link to a supers site where the artist has been redesigning the looks of various supers for fun: http://dresdencodak.tumblr.com/. I really like some of his ideas. I think it would be great if DC would do a mini-series using his concepts for characters, just as a one-off.

A picture of his version of the Justice League with Green Lantern, Superman, Powergirl, Cyborg, Wonder Woman, Martian Manhunter, and the Flash. (click for bigger version) 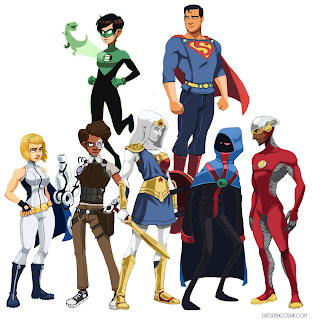 I'm sure most of you have heard by now, but Monte Cook was recently hired to work at WotC again in R&D. Margaret Weis confirmed that he is working on 5e over the weekend HERE. She's Queen of Darkness on that forum, and her post says: "I've talked to friends of Monte's who are friends of mine and they all say, Yes, he's working on 5e!  Margaret"

I'm not surprised at all. From everything I've heard, 4e has been a disappointment for WotC. Many players either never switched to it, or tried it and didn't like it. I know I gave it a whirl. While I think 4e had some cool ideas (healing surges, fighters having innate abilities), I think it was way too big of a departure from all prior editions.

Now the interesting story will be if 5e adds stuff back in from 3e, or if it goes even further off the trail into new territory. I suspect they will backtrack a bit in order to recapture old fans, but who knows? Maybe that ship has sailed, and D&D will become an IP for movies and video games, and the tabletop rpg gets abandoned after another year or two.
Posted by Dan at 3:32 PM 1 comment:

The illusion will appear as if it is standing still, but blinking or maybe twitching a shoulder. Enough that it looks real. It won't move, though.

If the Guardian is attacked, whether by weapon or spell, it will immediately let out loud clanging noises and start flashing brightly. Anyone standing near it must save vs. spells or be stunned for 1d4 rounds.

Any creatures within sight or hearing distance will immediately be alerted to the attack. Wandering monsters may be attracted to it, along with the whoever posted the guardian in the first place.

False guardians are mainly used by military forces to cover areas of minor importance. They don't have to waste a soldier's time, and any stealthy attackers will assume the sentry is real and will probably attempt to eliminate it, with disastrous consequences. Smart commanders also place it in areas that are more exposed to special operations attacks, so that a guard isn't endangered.
Posted by Dan at 2:17 PM 2 comments: