I know this is probably sacrilege  to the OSR, but I don't really care for the Greyhawk box set with the Darlene map. Yes, it is wide open so you can do what you want. There's not really anything going on, which a lot of DM's probably love. However, it feels very bland to me.

I'd have to say my favorite version is the Player's Guide to Greyhawk, which was published for 2e. It's still pretty open, but a lot has happened. The world actually feels alive. The Greyhawk Wars changed a lot of countries, the Circle of Eight was broken and rebuilt, and Iuz became a god. The Scarlet Brotherhood is also a great villain.

Another thing I like about this version is that even the evil countries fight each other. Ahlissa and the Scarlet Brotherhood are fighting in Onnwal. Heck, most of the evil countries would fight Iuz if he got near them. There are active wars going on (the new Shield Lands and Geoff are the best examples of this), but large parts of the world are relatively peaceful, or at least a good spot for adventurers. Heck, the area right around Greyhawk City is loaded with stuff for players to do.

In any case, if I get to run another Greyhawk campaign, this is the version I'm using.

I also have the Living Greyhawk book, and I like it. I don't think it's as good, though. Maybe the writing style is too dry, or stuff changed even further as the timeline moved. I'm not really sure, but I don't like it as much. 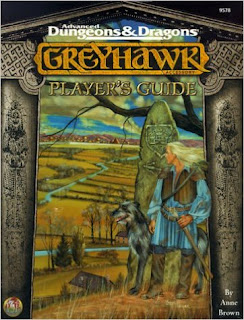